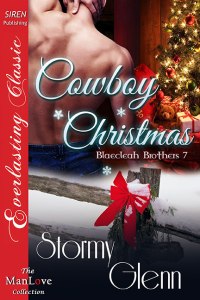 Life has settled down for each of the Blaecleahs. They’ve all found their legends and are living a life filled with love and happiness. But anything worth having is worth fighting for and not even the luck of the Irish can keep the Blaecleahs from having to fight to keep what they have when the past comes back to haunt them all.

In order to save Ma and Da, they may have to decide who they want to keep in their family, and who they don’t before that choice is taken away from them by someone they never expected.

When violence threatens them, aid comes from an unusual source but will it be enough to keep the Blaecleahs in Cade Creek or will the life they have built for themselves disappear before their eyes?

May you never forget what is worth remembering,

Or remember what is best forgotten.

Alani Blaecleah turned to see her husband setting another green rubber tub down on the hardwood floor of the living room. She chuckled softly when Da grunted and rubbed his lower back with his hands as he stood.

“Not if I keep lugging your holiday boxes around, I won’t.”

Miffed, Ma planted her hands on her hips and sent her husband her best don’t make fun of me glare. “Now, you know it wouldn’t be Christmas without all my decorations, Donnell Blaecleah.”

“Woman, I’ve been married to you for almost forty years. You could make Christmas happen with a shoebox and a ball of twine, and have.” Da waved his hands toward the stack of tubs that held all of the Christmas decorations Ma had collected over the years. “You don’t need all this fancy stuff to make a holiday.”

Ma smiled despite Da’s flustering. “They hold our memories.” She reached into the small box in front of her and pulled out a folded piece of faded paper. Ma set it on the table and smoothed it open with care. There was a lace doily snuggled inside the paper. “You gave me this on our first Christmas together,” she said as she held the small piece of lace lovingly in her hands.

It was one of her most prized possessions.

“I remember.” Da’s soft chuckle was as warm and light as summer’s breeze. “We had nothing that year, barely a roof over our heads or potatoes in the root cellar.”

“And yet you found a way to buy this for me.” Ma still remembered how blessed she had felt when Da gave her the small piece of white lace interwoven with intricate purple flowers. The small piece of fabric was so delicate she often worried it would just disintegrate if she breathed on it too hard, but it had held up for decades.

“Lachlan was still in diapers and Neason was just a couple of weeks old. We put every spare penny into making their Christmas special and yet you made mine even better.”

Ma felt tears prickle her eyes when weathered but strong hands settled on her shoulders, giving her a gentle squeeze. The warm body of the man that had stood by her side for so many years pressed gently into her back.

“It’s just an old piece of cloth, woman.” There was a suspicious sheen in Da’s pale-green eyes as he turned Ma and wiped his thumbs over her wrinkled cheeks right under her eyelashes. “Didn’t cost me more than a couple of hours chopping wood for old man Walker.”

“That man had two sons that could have chopped wood for him.” Ma pointed a finger at Da, not in an angry manner, but just to make her point. Her Donnell had a soft spot whether he wanted to admit it or not. “He didn’t need you to do it.”

“No, maybe not.” Da’s smile was a beautiful as a sunrise. His eyes twinkled and were so full of love and affection that Ma felt like she could drown in them. “But he also had a wife. He knew exactly why I needed to earn a little extra money.”

When Donnell looked at her with that twinkle in his green eyes, Ma felt like her husband’s universe. He had been looking at her like that for nearly forty years. It had been the main deciding factor in her giving up a life of luxury back in Ireland and coming to the new world with barely a penny to their name.

Da let out a bark of rich laughter, a joyous sound that Ma had grown to adore over the years. “I fought the whole of Ireland to have you, Alani, me love. I would be very upset if someone else thought they could take you away from me.”

Ma closed her eyes as she leaned her head back against Da’s solid chest, savoring the moment for what it was—a slice of time when everything in her world was perfect. Her soul mate held her in his arms, her sons were happy with their own partners, and the next generation was alive and well and adored by everyone.

A shiver of awareness slid through Ma when Da’s fingers threaded through her graying hair. She was grateful that Da was one of those men not afraid to show his affections. She, as well as all of their sons, knew that Da loved them, in word and in deed.

“Do you miss Ireland, Alani?” The words were whispered almost as if Da was afraid of the answer although he had asked the same question a hundred times over the years. Ma always gave the same answer.

Maybe this time, she should tell him the honest truth.

“I miss my ma, Donnell. I always do around this time of year. Christmas was her favorite holiday. I miss watching her decorate the house, the smells that filled every room, the food, the sense of something bigger than us that seemed to take a hold of everyone.”

Ma tilted her head back so that she could look up into the pale-green eyes she had fallen for as a young girl of barely nineteen. “What I don’t miss is the way my father tried to run my life, to dictate my every move, right down to who I was to marry. I don’t miss feeling like I was a disappointment because I failed at something my father believed I should have mastered just because of the family I was born into. I don’t miss feeling like anything I did was never good enough or that everyone in my family felt they were better than everyone else because we had money and a family name that went back centuries.”

Ma drew in a quick breath so that she could continue before Da said anything. “The Blaecleah name is an old and proud one, just as old and proud as my maiden name. But I’d much rather be a Blaecleah than the name I was born with.”

The beginnings of a small smile curved up one corner of Ma’s lips as she smoothed her hands down Da’s chest. “There are things that I miss, Donnell, but I think the question you need to ask is if I regret coming to America with you and the answer is a resounding no. It will always be no. Marrying you was the best decision I ever made, one I have never regretted.”

As his thumb gently traced Alani’s lip, Da smiled that sweet gentle smile he gave her when it was just the two of them. “You are the one good thing that has happened to me in my life.”

Ma cocked an eyebrow. “What about your sons?”

“Without you, I would have no sons.”

“Because of you, I have six beautiful sons, all of whom have found that one person meant just for them.” Da’s head cocked to one side, a funny little smile on his face. “Well, except for Seamus. He found two people. But the point is—”

“The point is that we are lucky.”

Da chuckled. “We are Irish, Alani. We’re genetically predisposed to be lucky.”

Stormy is giving one very lucky commenter an ecopy of Cowboy Christmas! Leave a comment to enter and win!