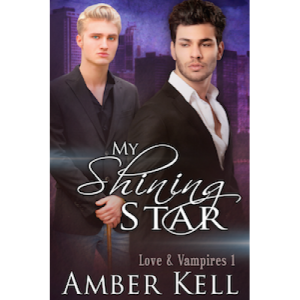 Augustus Griffin has never recovered from the desertion of his first love, Basilio Downs. Even though he’d gone on to get married and have children, his bittersweet memories followed him late into life.

Basilio left his love for reasons of his own. He didn’t want to drag his beloved into his new life as a vampire. Over the years he watched Augustus’ joy and devastation never going too far away.

When Augustus is attacked and transformed into a vampire he brings with him an entirely new outlook to vampire kind. Will he be able to adapt to his new life and forgive his old love or will outside forces tear them apart?

Anger fueled Gus as he left his apartment and shuffled down two flights as quickly as he could, hoping to reach the screaming man before it was too late. If he’d had any sense, he’d have called the police, but he was tired of punks roughing up people in his neighborhood. This time, he would do something about it. Fury kept him going to the ground floor. He stopped, winded, at the base of the stairwell to catch his breath before he could continue.

Straightening his shoulders as much as he still could, Gus pushed open the heavy door that exited out to the alley. The punks had already left, and a man lay still as death on the ground.

“Poor kid,” Gus muttered. The victim didn’t so much as twitch when Gus approached. Damn, Gus hoped he wasn’t dead! The young man couldn’t have been much older than his mid-twenties.

Using his bat to balance himself, Gus kneeled beside the battered male, his arthritic knees screaming with pain as they hit the rough asphalt and bits of stone dug into his skin through his thin cotton pants.

Damn, he wished he’d grabbed his phone. In his hurry to rescue the guy, he had foolishly left his cell phone on his coffee table. Gus brushed the victim’s hair back from his face. To his surprise, the young man’s eyelids snapped open, and dark, liquid, pain-filled eyes stared back at him.

“Hey, buddy, you all right? Do you think you can stand?” Gus asked in his gentlest tone. He didn’t know if the man should be moved or not, but he couldn’t abandon an injured person in the middle of a filthy alley. What if the assailants returned? Unfortunately, he also wasn’t strong enough to lift the guy up the stairs either. Being old sucked.

“Help me,” the man whispered.

“I’m trying to, but I need to get you upstairs. I don’t have my phone,” Gus explained.

When the young man didn’t speak again, Gus crouched down to slide his right arm beneath the stranger’s shoulders while using his left hand to balance himself with the bat.

The man struck like a viper. Sharp teeth pierced Gus’s skin and sank into his jugular. With a cry, Gus dropped the bat. It hit the ground with a hollow thud, then rolled away.

Why did it never pay to be a Good Samaritan these days?
As he futilely tried to pull the man off him, Gus’s heart stuttered in his chest and the world went black.

One thought on “Throwback Thursday!”